This page is primarily on events that don't belong to the catastrophic group. See our news page.
Here, we concentrate on regional earthquakes and those which are at the limit of detectability with the gravimeter.

B.t.w. EMSC, the European-Mediterranean Seismological Centre at Strasbourg lists its magnitude at 4.9. The lower values is SNSN's estimate, in agreement with the CMT assessment (Björn Lund, Uppsala university, pers.comm.). CMT is the Global Centroid Moment Tensor project lead by Göran Ekström at Harvard. (The event is not in the searchable data base).

The epicentre coordinates I received from Björn place the event just south of the border to Jämtlands län (Härjedalen). SNSN tells us that the region is southern Härjedalen. We shall not engage in a dispute due to round-off error and re-estimation (0.01 degrees is about 1 km).

The larger distance from Onsala to this event causes more surface wave energy at longer periods to pass the anti-aliasing filter of the gravimeter's recording system. The events near Halmstad and Falkenberg (further down on this page) were met with more attenuation owing to their higher frequency content. 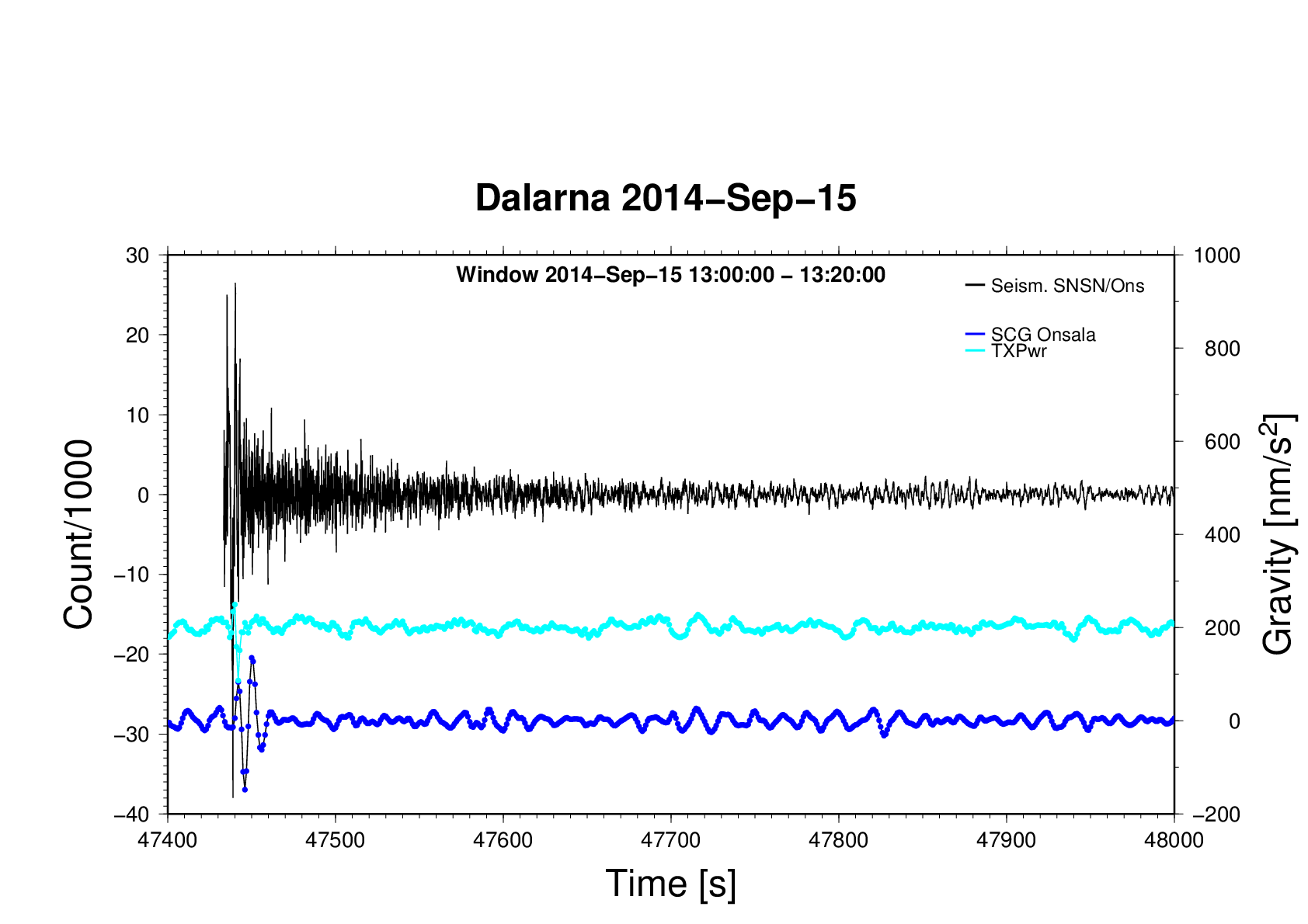 The SNSN seismometer at Onsala did have problems in September, seen as frequent interruptions of the data stream. Nor could missing data be salvaged from the recording system's hard disk. Therefore, the part of the wave train of first arriving body waves is missing in the diagram above; it's the surface waves (Rayleigh) that you see. Surprisingly the verticality system of the gravimeter became engaged. It's purpose is to keep the instrument aligned in the vertical. Horizontal accelerations are equivalent to a tilting of the instruments. The feedback control is sufficiently fast to send a correcting signal to the pistons mounted in the gravimeter's feet. This signal is represented by the light-blue curve above (TXPwr = electrical power to the tilt-control in the X-direction).

About EMSC and SNSN and CMT

An earthquake of about the same magnitude occurred in Northern Italy on Aug. 28, 2014. The signal the gravimeter has recorded is much clearer and complete. Goto our collection of earthquake plots. The file name starts with Garda...

A: Sure!
The 0.5 Hz Nyquist filter did not attenuate the wave train enough, so that motion can be seen in the gravity channel. Comparing with the seismograms from the SNSN (Uppsala university) seismometer at Onsala suggests that most of the signal energy is at much higher frequencies than 0.5 Hz.
Here are the figures, Fig. 1 from the SNSN home page,  Fig. 2 showing the gravimeter signal, and Fig. 3 the three channels of the seismometer. 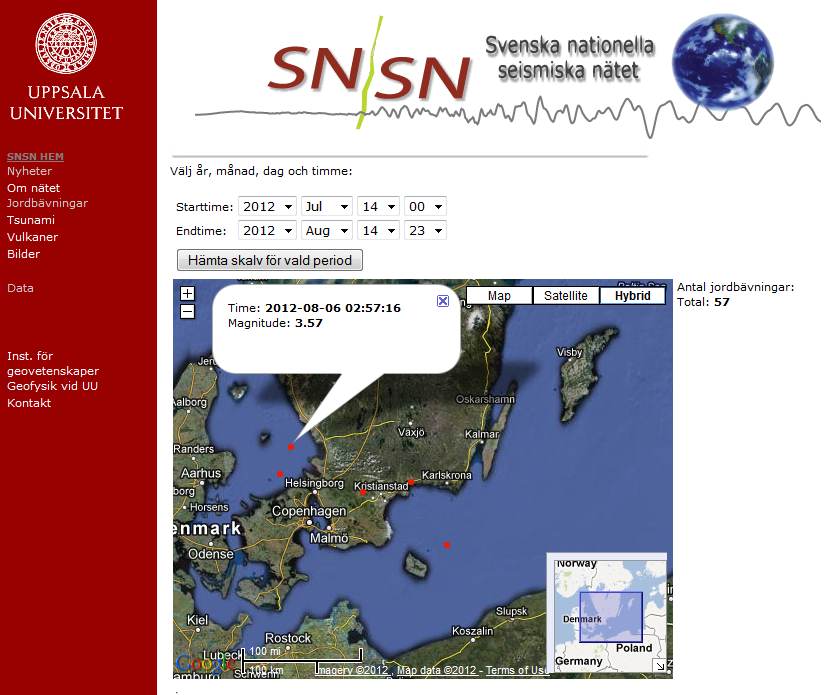 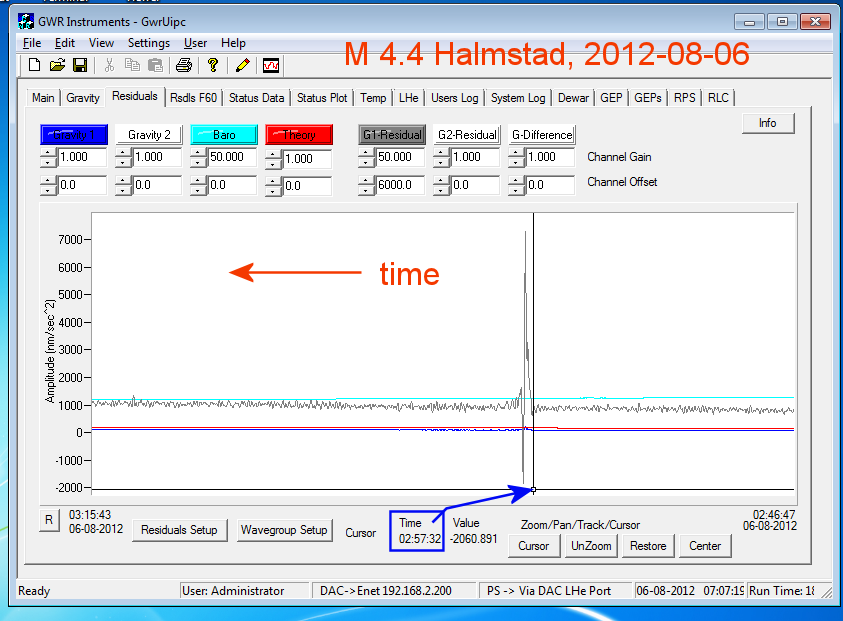 Fig. 2 - Gravimeter. Length of the record is 29 minutes short of 4 seconds.

Fig. 3 - Seismometer. Length of the record is 2 minutes and 50 seconds, time progressing towards the right.

For better comparison with the seismometer, here's the gravity signal (oversampled at 10 Hz) for the same time interval 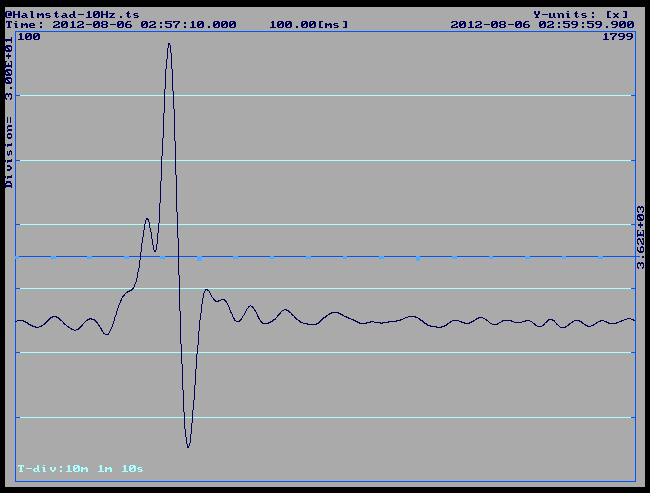 Fig. 4 - Gravimeter signal after resampling - remember that the signal is based on 1-second sampling after an anti-aliasing filter. The apparent low-frequency content is misleading.


Q.: Did the Superconducting Gravimeter "feel" the M2.2 local Earthquake near Falkenberg, 2012-JAN-08?

A: Certainly, but you cannot see its signature in the 1-second sampled data. Events like this will be recorded in the future when the installation of the Quanterra Q330HR is completed.

In Fig. 4 an example of an earthquake is shown that is visible in the SG record.


The distance to Onsala Space Observatory is 77km. See Fig. 1 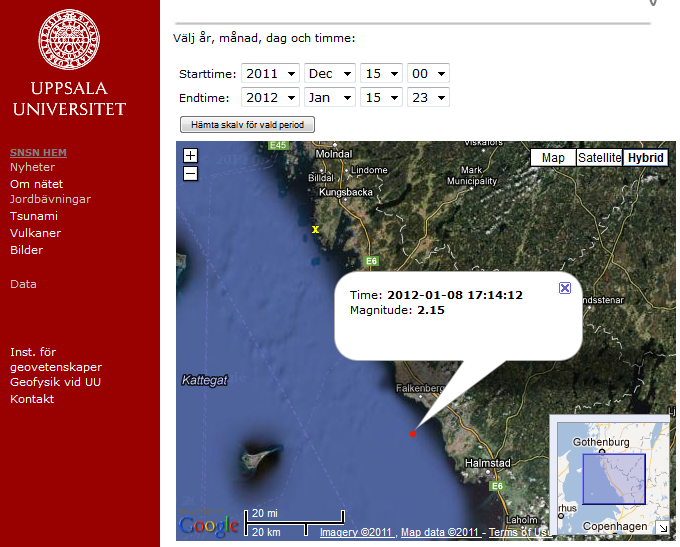 On the Superconducting Gravimeter, the recording shows the typical microseismic background (Fig. 2), wave packets centred on an 8-10 Hz frequency; no sign of the Falkenberg event can be identified. A look at the power spectrum of the seismometer, once with the earthquake in the time window and once from a time segment 10 minutes before, shows that practically all signal power is located a decade higher in frequency than the Nyquist frequency of the gravimeter's 1-s sampling. An anti.aliasing filter in the gravimeter rejects signal with frequencies above 0.2 Hz (Fig. 3). 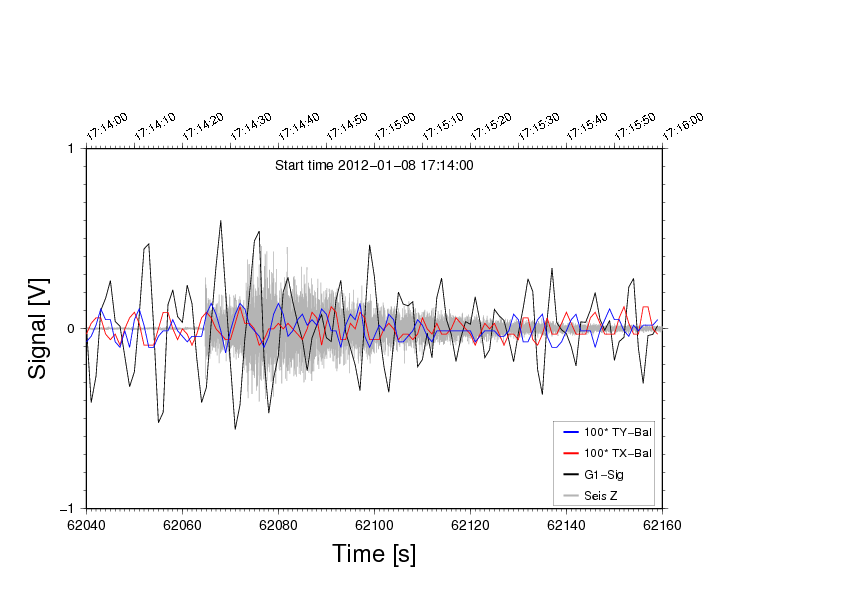 Fig.2 - The signal from the SNSN seismometer located in the gravimetry lab at Onsala (gray), sampled at 0.01 s, and three channels from the gravimeter, sampled at 1 s.
The gravity signal is shown in black. The red and the blue curves show the two tilt sensors. 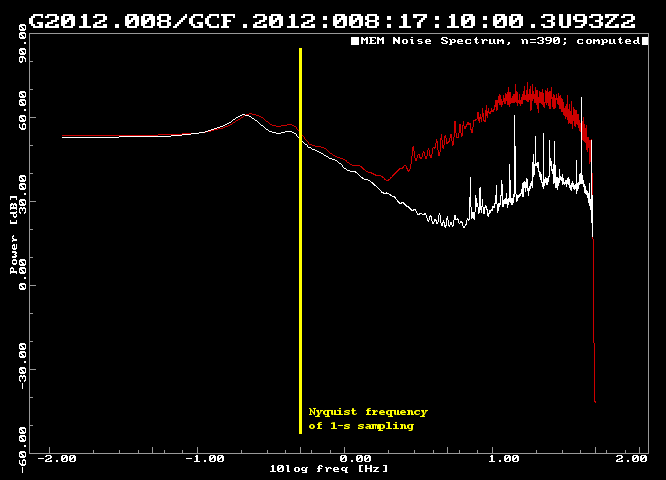 Fig. 3 - Power spectrum of the Z-component of the Seismometer at Onsala, converted into acceleration. The white curve is from a time segment without an earthquake signal, the red one includes the Falkenberg event. The spikes at 6 Hz and above in the earthquake-free curves are vibrations probably due to the liquid-Helium compressor in the gravimetry lab. 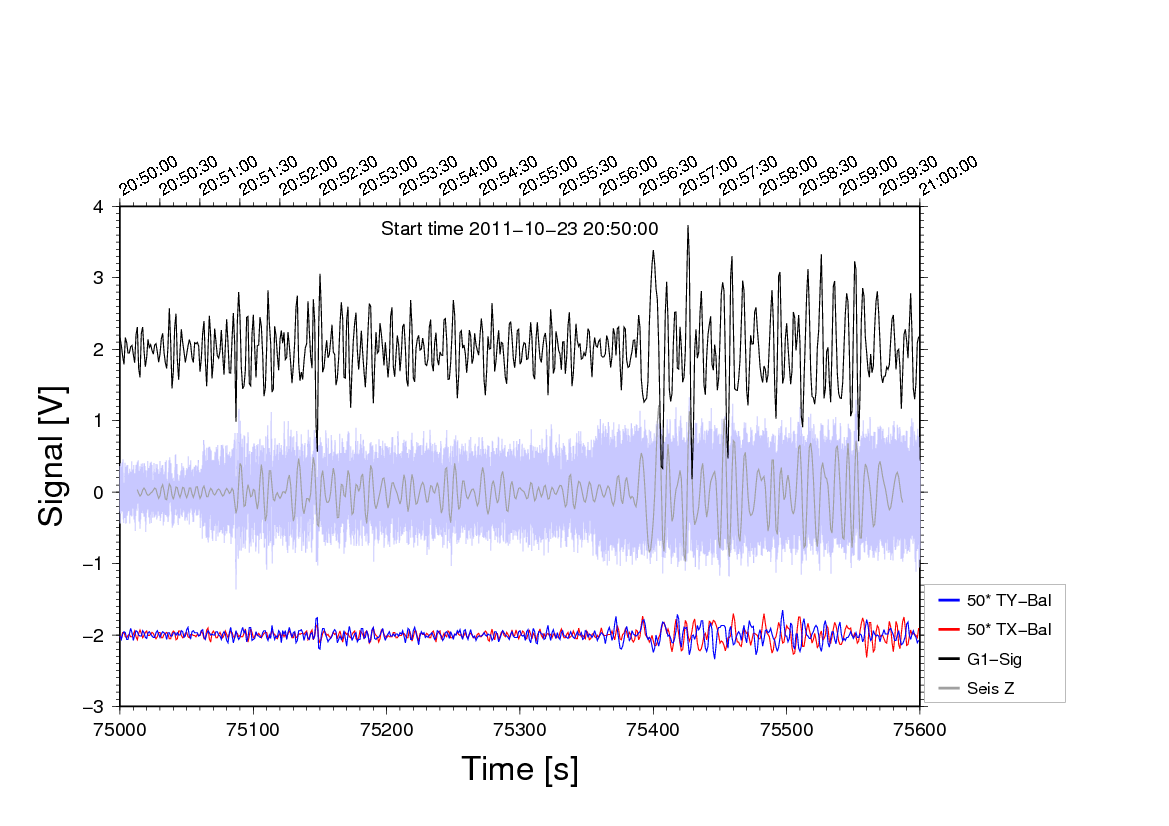 Here's the corresponding spectrum, during the earthquake (red) and half-hour before (white) 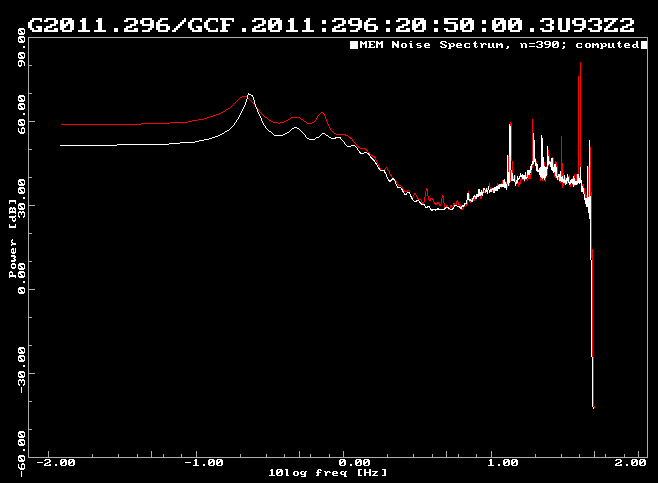